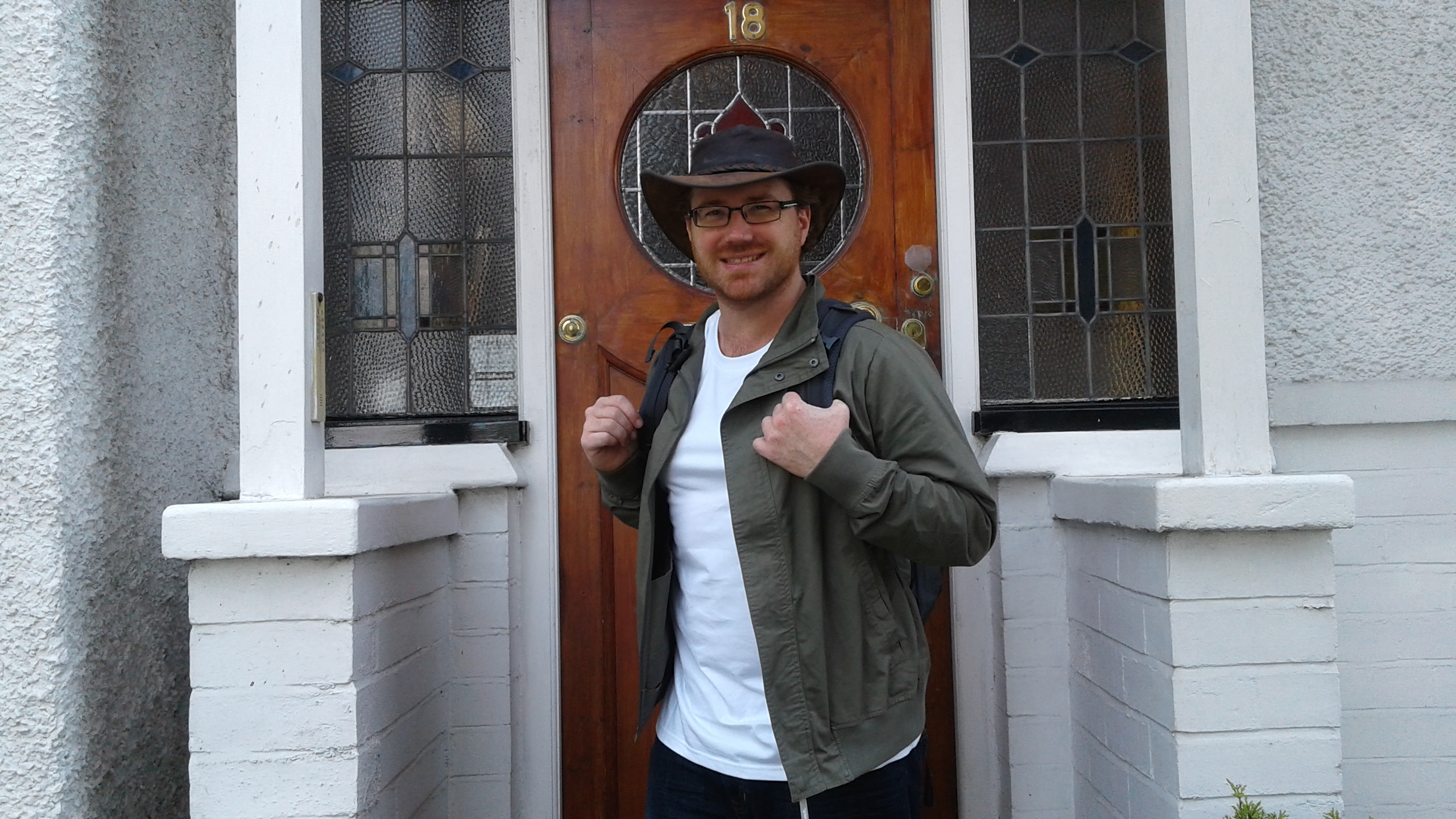 I would be leaving the UK for Denmark (from whence I would be taking the ferry to Sweden) on Sunday 13 August. Since the visa debacle I had just one day to buy all the kit I required AND get this website up and running.

I spent the morning of Saturday 12 August looking for some clothes to wear. I needed some baggy jeans (if I’m going to be wearing the same kecks for 18 nights in a row I at least want them to be comfortable), a light jacket (it’s August, I’m not going anywhere cold), a new backpack (my good ol’ Lowe-Alpine’s outer zip broke while I was down in London ARRRRGH) and a pair of orange shoes. The orange shoes were as a result of a sponsorship deal with StepOrange, a company that works with charities around the UK and beyond.

That part of the shopping frenzy was fairly straight forward. But then I needed to update my technical stuff. New video camera, new laptop, new phone and new SIM card. I also wanted to buy my interrail pass from Sta Travel.

This did not go so well.

Now of course I’m not flush nor have I ever been. However, my friends and family had clubbed together to raise enough funds for me to do this challenge without me being out of pocket. However, the Russian and Belarusian visas had knocked a fair chunk out of my travel kitty and you really don’t want to know how much the ferry to Iceland cost, so my budget for techy stuff had been somewhat slashed.

The new laptop was the first appliance to be sacrificed on the altar of frugality, I’d just have to take my clunky old Dell Latitude that crashes more often than Noddy when he’s on the razz. For a new phone I headed to Cash Converters on London road and got myself a second-hand Samsung Galaxy S6 for £180. It was locked, but still – bargain. I ran over the road to the mobile phone repair shop and got it unlocked for £15.

I then went to Three Mobile on Church Street and spent a good half hour registering for a one-month contract SIM that would give me 12Gb of data on the mean streets of continental Europe. They don’t make it easy for you, they really don’t.

No time for getting things set up I rushed up to Sta Travel on Bold Street to get my Interrail pass. Only, what’s this shit? You can’t just buy a pass? They have to send it to you? And it takes three working days? FFS. I would be leaving for London in less than 24 hours. This was not good news. The nice staff in Sta said I might be able to pick one up in St Pancras the next day but they didn’t know.

While I pondered a solution to this catastrophic turn of events I ran over to John Lewis for the big spend of the day: a new camcorder.

Since they gave me a phone, a DSLR camera, a smart watch and a frikkin’ tropical island, I have some degree of brand loyalty to Samsung. However, they don’t really do what I was after. I needed something like Al, my travel buddy from The Odyssey Expedition. Something familiar. And that meant going for a Sony camcorder.

But what sold me was the gyro lens. It moves as you do, giving a nice smooth almost Steadycam feel to your hand-hand footage even when you have the DTs on a yacht in a cross-fire hurricane. Perfect.

Okay, my laptop can probably not even begin to handle 4K video, but hey-ho.

The only problem was that John Lewis only had a display model. “We can order one in if you like.”

No dice sweetcheeks. I don’t go shopping in real life because I want to wait for things to arrive. We have Amazon for that. So I high-tailed it over to Argos in Liverpool One.

They didn’t have one either. But the store in Birkenhead did. The last one in Merseyside by the looks of things.

It was 5pm. I had so much to do, get organised, set up and book it was silly.

So I ran to Liverpool Central and got the train under the Mersey, popping out at Conway Park on the other side. Biff bash bosh, camcorder onboard.

But there was a problem. My “new” phone wasn’t working. And neither was my new SIM card. I wasted so much precious time dicking around with the damn thing it was silly. I’d just have to take it to the phone repair place the next day on the way to the train.

I wanted to go out into town for a farewell beverage or two, but there just wasn’t time. By 10.30 I was ready to crash out for the night, but one of my fans from India had driven all the way up from Nottingham to meet me and so I jumped in the car to meet him at the hospital which was the only public building I thought would still be open that late that wasn’t a pub. He had come with his wife and daughter as well as his nephew. We posed for some photos and he gave me a wallet and pen as a gift, wishing me well on my upcoming journey. Nice guy!

Sunday morning I was up bright and early. The important thing was for me to get to London before 5pm as on the off-chance that I could get my Interrail pass from St Pancras, I was fairly certain they wouldn’t be open late. I shot a quick video in my back garden with the giant PANTS TO BREXIT pants that were sent to me by my friends in the Stop Brexit coalition. Then it was stuff-everything-in-my-bag-and-get-the-hell-out-of-Dodge time.

I said goodbye to my Dad and my lovely mum gave me a lift to the city centre. I got to the phone fix-it place where I got the news that no proud owner of a new second-hand S6 wants to hear. It wasn’t just locked, the handset was blocked – ie. it had been stolen and would have to be sent back to Samsung to ever work again.

I gave the phone to my mum for her to try to get a refund from Cash Converters. I’d just have to make do with the Samsung J2 I bought in Panama for $100 that can’t even handle Pokémon Go. Ho-hum. At least I had the new Three SIM card so I’d have loads of internet to play with (and broadcast live Facebook video updates). Or did I…?

It took a while to figure out what exactly was wrong with the phone and as a consequence I had to run to make the train, in order to arrive in London before 4pm. Bye mum!

I ran from Euston to St Pancras, but it was in vain. They didn’t even sell Interrail tickets.

So then. Plan C. I’d get the tickets online and have them sent to my cousin Simon in Copenhagen. Cricket, my Passeportout, would head over to the Danish capital and pick them up before meeting me in Northern Jutland when I disembarked the ferry from Iceland on Saturday August 19 (I’d be doing the Iceland jaunt alone).

Okay then. Next job: get to Northern Jutland before the ferry for Iceland left on Tuesday morning. In the spirit of the adventure I’d be travelling there overland through France, Belgium, Amsterdam and Germany. The Eurodyssey Challenge clock would start the moment the ferry came alongside in the port in Seyðisfjörður on the East Coast of Iceland.

Smoke me a Ukipper, I’ll be back for Brexit.

Off To A Non-Flying Start