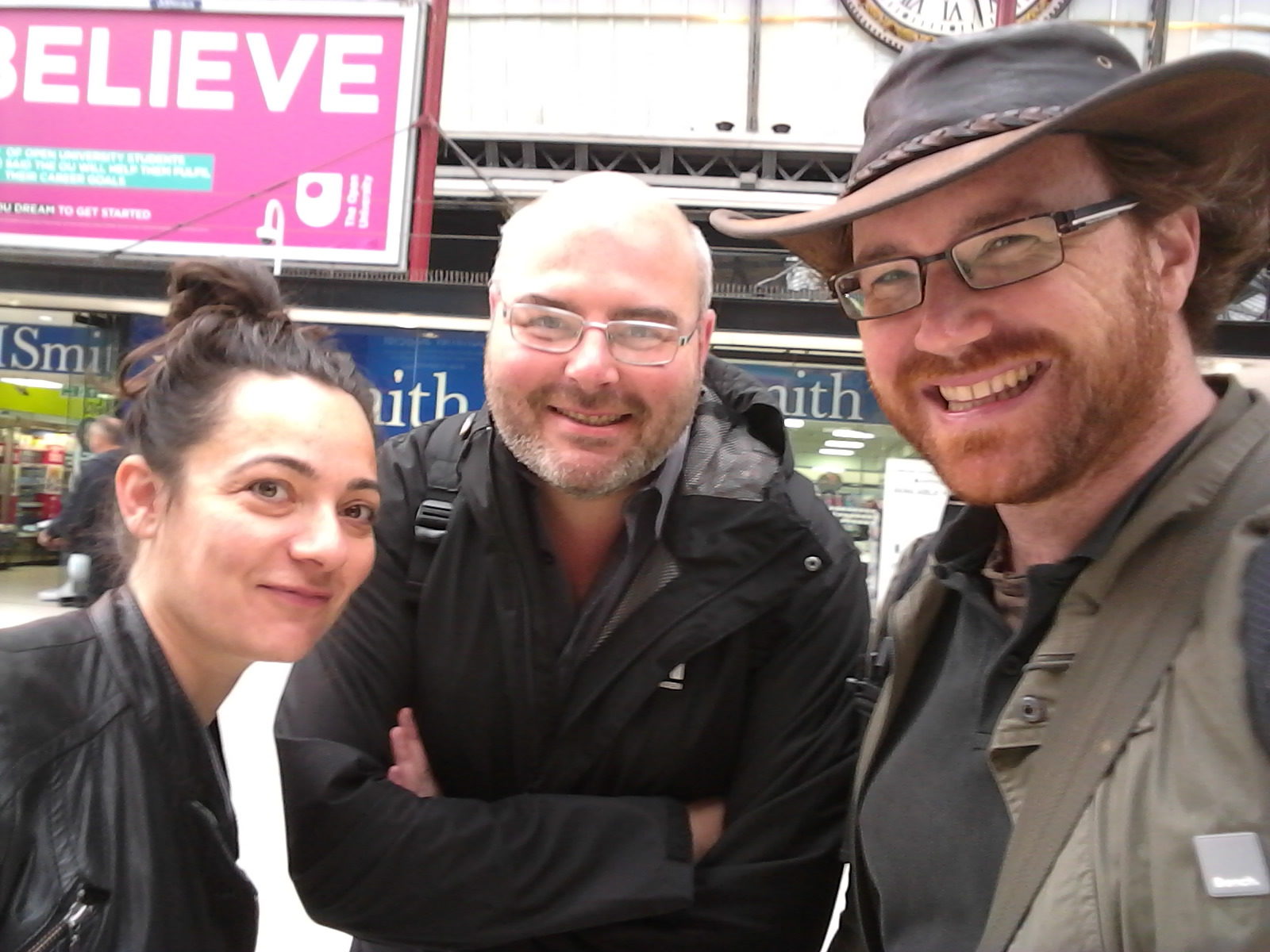 At around 5pm I was awake again and we were coming into port in Holyhead. The first train to Chester and then the familiar Merseyrail to Lime Street Station, Liverpool. My mum works in a community college and today was GCSE results day. As a result, she couldn’t meet me at for the bag drop, so it fell to my buddy Lindsey to meet me by the statue of Ken Dodd.

We had about ten minutes before I had to be on the train to Wigan Wallgate. Another of my old schoolfriends Ben turned up to wish me well, so the three of us got a photo together and I got on the train. Only, wrong train. Yes it was going to Wigan, but stopping at every lamppost along the way. The express left 2 minutes earlier.

Well then, what to do? Well then, Plan B: Wigan is less than 50km from Liverpool, so I took an (expensive) taxi, arriving at the station with a few minutes to spare before getting  on the connecting train to Carlisle a few miles south of the Scottish border, arriving just before midday. I had the fortune of hailing one of the very few hackney cabs that service Carlisle, driven by a local historian, no less! “Gretna Green please”.

For you non-Brits, Gretna Green is a famous Scottish border town where randy English couples could get married (over the blacksmith’s anvil) without having to announce their intentions to wed (and therefore allow for objections) back in the day.

Now, every country that I’m visiting I’m trying to get somebody from that country to say “Welcome to… [insert name of country here]” in their own language. Although I did find a bloke in full tartan kilted get-up playing the bagpipes, he didn’t speak Scots Gaelic (few people do), but as a welcome to Scotland they don’t come much more, erm, Scottish.

Right then, back to Carlisle and onto the 1pm train down to London. I sat opposite a Scottish bloke who was having terrible trouble with his MacBook, and thought he may have lost 3 months of sound production work. All those of you reading this: GO BACK UP YOUR STUFF. NOW. You can continue reading while it copies over, no worries.

I arrived in London around 3pm and a short walk from Euston to St Pancras later I was reunited with Cricket, who had very much enjoyed her day off in London. I had asked her to get me a new SIM card that I could use in Europe. Hilariously enough, she got me a Three Pay-As-You-Go. Ah well, fuck it – it worked.

I also asked her to get me some odor-eaters as my fab new orange shoes (thanks, StepOrange!) were beginning to pong. All set with new underwear, new SIM and nice smelling shoes, we boarded the 4pm train to Brussels.

Cricket had never been on a European high-speed train before, so when we started clocking 300kmph, it was great to be travelling with somebody who appreciates such things. We changed in Brussels for the train to Luxembourg and I got a minute to put on my giant PANTS TO BREXIT pants.

I should explain that Luxembourg was always a bitch. Its shitty train connections were a massive headache for me when planning the trip. I decided to leave it until after I had ticked off Switzerland – under the original plan it would have been one of the last 10 countries I would visit. But with me having to redraw my entire journey from this point forward, and since I had to push the train journey from Paris to Portugal back an entire day, Luxembourging it tonight would claw a little bit of time back.

We arrived at a station close to the border before being told to disembark and take a bus. This explained the Luxembourg-shaped headaches I had been having.

With no train back out of the country until morning, we found a backpackers and crashed out for the night.